Remember that contest I entered? Well I didn’t win. Not even an honourable mention. But I’m ok with that. Mostly because now I can post it here.

An Open Letter to an Old Friend

I’m not one to complain. It’s just my nature to let things slide, forgive and forget, look the other way. When, of course, there is another way to look. Truth is, I’m an easy-going kind of gal who just needs a grande, nonfat, no foam, extra hot, one shot (perhaps with a  pump of vanilla) latte each day right around 2:00 pm to stay that way. I don’t even grimace when waiting in line to plunk down the 4 bucks and change for my afternoon indulgence. And all I have ever asked in return from you is a comfy chair on which I can rest my larger than I ever remember, middle-aged, or so, behind. Which brings me to the reason for this letter. Mr. Starbucks, what exactly were you thinking?

Don’t get me wrong. I was excited to learn that you were embarking on a revamp of my neighborhood haunt. It was going to take a month. So what? Who’s Mother hasn’t told them good things come to those who wait? Besides, that month gave me more time to dream. Soon enough I’ll be nestled in a brand new overstuffed, cocoon-like, leather chair, adjacent to a cozy, glowing fireplace, whiling away the afternoon sipping on that perfectly made latte, reading the latest offering of my favourite author, sharing philosophical banter with one of my many Starbucks’ friends. Perhaps a short snooze if the time is right.

It’s hard for me to explain the feeling of anticipation as I watched the brown paper that had covered the windows for what seemed like an eternity (you really should revisit your definition of “coming soon”) slowly peeled off to reveal the fruits of your labourers. Stepping over the threshold, my eyes quickly traveled from one corner of the room to another, and then yet another. Wait. There’s no fireplace. No comfy chairs. Hardly any chairs at all. As you can imagine, I was overcome with dismay. This renovation is for someone else. Someone, I suspect, with a much tighter behind than mine; one that has no trouble settling into the miniature wooden structure I’m supposed to believe is a bar stool. Someone whose body is still supple enough to duck under the long, sterile looking table to plug in an electronic device that becomes her conversational partner for the remainder of the afternoon. Someone who is definitely not me.

I get it Mr. S. Time does not stand still. There’s a younger generation primed and ready to fill my chair. But just for the meantime, while I’m still around, would it kill you to make that chair just a little more comfy? 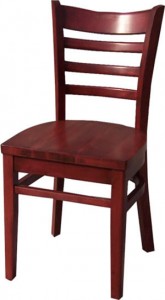 It finally happened. Wait. Perhaps I had better backtrack for just a moment or two. Many of you I’m sure, have noticed that I have been remiss, having not posted to the B.S. sightings section of the blog for quite some time. It’s not that things have changed all that much over the past little while. As far as I can tell I look pretty much the same as always and I believe my doppelganger chanteuse does too. And it’s not that people haven’t continued to notice. As a matter of fact, the sightings themselves have not diminished at the same rate as the writing about them has. It’s just that, for the most part, they’ve pretty much been the run of the mill “has anyone ever told you” events. Well there was one server in Vancouver who used “astonishingly like” in a sentence with regard to my likeness to Ms. Streisand. And there was the make-up salesperson in Toronto who told me how lucky I was to share her resemblance, although I must admit that I silently wondered whether she was really trying to sell me more product. But neither of those inspired me to write an entire paragraph on the encounter. Nothing really had struck as sufficiently unique, until now.

But you’ll have to wait just a little longer because I must digress. You see, there are several parts to this story so it’s going to take some time. If you’ve been following along carefully for the last 2 and a half years, you’ll know that I can oft be found at my local Starbucks, with or without a view of the sea, sipping on a nonfat, no foam latte.  It’s just what I do and I particularly like to do it in what those of us “in the know” know as “the comfy chair”. Because you see, at every one of these establishments there is a variety of seating options ranging from “not so comfortable” to “really comfortable”. As a frequent flyer (I’m so far ahead of the game that my SB gold card has pretty much been renewed indefinitely) I am, of course, prone to select the latter option whenever possible. Possible being the key word as, more often than not those comfy chairs are occupied by my compatriots and I’m relegated to something harder and much more wooden. At least for the time being, as before too long the phenomenon best described as the “Starbuck’s Shuffle” begins.

For those of you who have never experienced said shuffle, here’s how it works. First, you plunk yourself down at a table as close to the comfy chairs as possible. Next, you make yourself not too comfortable because hopefully sooner than later, you’ll be moving. Now here’s the tricky part. You need to keep your eye on the prize without raising the suspicions of your fellow sippers lest you end up in a foot race. This next step is important because the very moment (and I mean right away) that you see movement at those comfy chairs, is your cue to swing into action. What you do now is dependent on where you live. In some cities it’s ok to hover, and you can step right up and help those who are leaving, leave. In other cities convention has it that you allow the leavers to leave and only approach the chairs when their previous occupants are sufficiently out of the way.  You’ll have to figure this one out for yourself. In either case, it’s never easy but trust me, the reward will be well worth the effort.

So with this in mind, let me tell you what happened last week. As expected, I found myself sitting at a table secretly (I thought) surveying the landscape in an effort to determine which of the comfy chairs were most likely to be vacated first. I’m looking for all of the clues, an almost empty cup, one member of the party making their way to the loo, perhaps a computer being packed up, when suddenly my eyes meet those of another. And at that moment, much to my astonishment, the man whose eyes I had inadvertently met and who, until that very moment was a complete stranger, stands up and without hesitation says “my wife says we should give the comfy chairs to you because (and here it comes) you look like Barbra Streisand.” OMG! They gave up their comfy chairs for me! After all of this time, all of the sightings, all of the witty retorts to “do you know who you look like” I have had to come up with, it finally happened. I’m finally reaping the benefits of being a “look-a-like”. I’m finally living the life!

And now there’s only one problem. I’m just not sure how I’m ever going to sit in one of those hard, wooden chairs again.