Pets are People Too 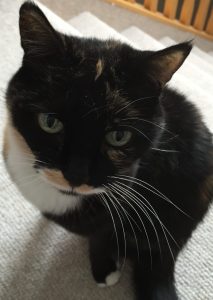 I’ve been thinking about this a lot since walking past the young woman wearing a Tee emblazoned with “Pets are People Too” as she made her way with her loyal companion to our neighbourhood dog beach. Named as such, I suppose, because its a place where you can let your dog frolic without the constraints of a leash and where no sane person without a dog would dare to venture.  As I pondered this sentiment of hers (I assume that’s why she donned that particular Tee) I came to the only conclusion that I could. Actually they are not. Pets are not people too.

Now before you get your knickers in a knot, you need to remember that I have shared my home with cats (there have been 3) for the past 38 (yes, I counted) years. And I love, and have loved them dearly. I know from experience that we pet owners, cherish our pets. They become important members of the family. We pamper them, cuddle them, talk to them and give them our hearts. But I can honestly say that at no time over what has been a very long time, have I ever mistaken one of them for a person.

This might surprise you but as a shallow person I don’t come to conclusions lightly. Actually, I like to look at things from all sides mostly in the hope of never having to commit to one or the other. So when I started to think about pets being people I spent some considerable time pondering whether or not this could actually be true. The more I thought about it the more examples I came up with to disprove this theory. Think about it.

First things first. If pets were people at some point in their lives, hopefully sooner than later, they would figure out that it is rather inappropriate to “do their business”, so to speak, wherever and whenever they choose. Even the most resistant of children come to grips with going to the toilet before they reach, I’ll be generous here as some less demanding parents are, their 4th birthday. With pets however, we seem quite content to pick up after them ad infinitum. We don’t hesitate to load up our pockets with plastic bags each time we leave the house or start the day off, sieve in hand, over the litter box cleaning out the produce of the previous day. If pets were people, it seems to me that we wouldn’t be picking up their poop for the rest of their lives.

This too. If pets were people they certainly would not tolerate having us dress them up in silly outfits. Have you ever tried to put a hat on a baby? You put it on, they take it off. You put it on again, they take it off again. One more try. You put it on, with more authority this time. They start screaming and throw it on the floor. You pick it up and put it back in the closet. But not pets. Your pet (well let’s be realistic, this doesn’t apply to all pets) will not only let you dress them in a Halloween costume of your choice, they will also let you take a pic and post the goofy look on Facebook for all your friends to comment. Just try that with one of your kids and see what happens. If pets were people you’d be out that night trick or treating on your own.

And finally. If pets were people, dimes to dollars they wouldn’t be quite as loyal, compassionate, forgiving and non-judgemental as we all know they are. Let’s face it. When was the last time your pet looked at you as if to say “where did you find those 10 pounds?” Or chastised you for not having dinner on the table precisely at 6:30 pm? Who lays at the end of your bed all day long while you sniff and blow and moan and groan with that flu bug you didn’t get a shot for simply because they know it makes you feel just a little bit better to have them there? Who can you tell all of your secrets to and be 100 percent confident that they will never tell anyone else? And who’s there to greet you each and every time you walk through your front door no matter how long you’ve been away? I’ll tell you who. Your pet. Well unless it’s a hamster, a rabbit, some sort of reptile, a bird or a fish in which case greeting you at the door probably isn’t such a good idea. Can you say the same for the people in your house? That’s what I thought.

As you can see I have put quite a lot of thought into this and steadfastly stand by my claim that pets are not really people at all. And you know what? I don’t think that’s such a bad thing.