What’s in my bucket?

These days there’s a lot of talk about bucket lists. It seems to me that the concept became particularly popular after a movie about a couple of old guys who wanted to do a bunch of things that no one else wanted them to do. They wrote them down, hence the formation of the “list” and checked them off when they were done. More recently, on one of my frequent trips to Costco, I noticed that there are books being written about all of the things we need to do and places we need to visit before we die. I suppose they are relatively harmless, although I do wonder if identifying 10,000 “can’t miss” wonders of this earth might be a little excessive and a somewhat ambitious accomplishment to expect of anyone during one’s relatively short lifetime.

Even so, if that’s where it all ended I probably wouldn’t be writing about this today. But as I started to research the “bucket list” concept I was rather shocked to discover that the internet is chock full of instructive sites designed to not only help you build, but also track the completion of your list. As a matter of fact, and this kind of surprised me, there are sites where people share their lists to help others who I guess, can’t come up with stuff to do on their own. Seems to me that piggybacking on someone else’s list is a little suspect but, and I’ve said it before, who am I to judge? To top things off, tonight as I am writing this post, I am keeping one eye on a movie where a lovely, but of course dying woman, is managing to finish off her list in the face of a rather imposing deadline. Given the overwhelming evidence I am convinced that this whole thing has become rather ubiquitous and even so, I can’t seem to recall ever having put together such a list for myself.

I do have to admit however, that I was rather intrigued by the scope of “things to do” that my internet friends (I feel as though I can call them that since they are sharing some of their innermost, lifelong desires with me) want to achieve before they die. Certainly travel takes center stage on lots of these lists informed, I am sure, by those “10,000 places” books. Stonehenge, the Eiffel Tower and Niagara Falls are favourite, ultimate destinations for many. There are some rather mundane items, such as “learning to knit “or “eating a Pop Tart” and other more lofty goals like “donating to a women’s shelter” or “helping a homeless person”. Some people want to focus on improving themselves by “becoming more positive”, “running a marathon” or “quitting the insidious tobacco weed”, all commendable and likely realistic goals if you ask me. Unlike the person who wants to “meet a unicorn”, which I believe is much less likely to happen and can only end in disappointment and a sense of failure, leaving me to wonder why anyone would intentionally bring this upon themselves.

There are however, items on these bucket lists that I find a little confusing. Like the woman who wants to be “homeless for a week”. Seems to me that you are either homeless or you’re not. And if you’re not, well why would you want to be? My guess is that a real homeless person would never add this to their list. And what about the woman who wants to “jump off a moving train”? It wasn’t at the bottom of her list but I’m thinking that it should be because there’s a pretty good chance that it’s the last thing she is ever going to do.

After reading through all of the lists I’m beginning to think that I might be one of a very few who doesn’t have a bucket list, which probably isn’t so surprising since it’s just not the kind of thing that shallow people tend to do. Let’s face it, I have enough trouble writing this blog once a week so I’m certainly not about to commit to a whole whack of other things that I have to do. Nonetheless, I’ve thought about it and have come to the conclusion that there is one item I want to put in my bucket. And here it is. I want to win the lottery. This is not some passing fancy, a frivolous , “oh wouldn’t that be nice” wish. No, I really want to win the lottery. I know you think that the ability to accomplish this goal is out of my hands but perhaps no more so than the person who wants to “witness a miracle” which, btw, was also on the list of the dying woman in the movie, making it, in my eyes anyway, a somewhat legitimate bucket list item. Maybe it would help if I just rephrase and say I want to “witness the miracle of winning the lottery”. I figure once that happens it will be a lot easier for me to make the rest of my list. 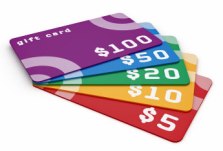 I love gift cards. Oh, it’s not the “getting” of gift cards that I love. For shallow people the obligation that goes along with the receiving of gifts warrants a post all to its own. No, what I love is that gift cards exist for the giving. Let’s face it, the fact that I have mastered the art of feigning interest probably means that I don’t know as much about those around me as one might hope. Honestly, do people really expect me to discern their favourite colour by simply looking at what they wear everyday? Or is it through some kind of osmosis that I am supposed to know whether it’s the “cinnamon appleberry” or “apple sunset” Yankee Candle scent they prefer? Perhaps there is a way to determine if someone likes light better than dark chocolate, but I sure don’t know how that’s done. And when it comes to choosing between red or white, well after the first glass it’s all the same anyway, isn’t it?. And so it is that the practice of appropriate gift giving has alluded me. But don’t get me wrong. It’s not that I don’t want to give gifts, it’s just that finding “things other people might like” can be so overwhelming at times.

I mean, how often do people really like the gifts that they get? Sure, they smile politely and thank you profusely for your thoughtfulness all the while trying to make themselves believe that it truly is the “thought that counts” and that maybe someone, somewhere would appreciate having “whatever this is” on their mantelpiece. As a matter of fact, this is such a commonplace occurrence that we now talk about “regifting” as if it were part of our everyday routine…like eating breakfast, or going to work, or drying cranberries. Well that last one might not be in everyone’s routine but it’s in mine as a result of a fruit dehydrator someone gave me for my last birthday. Of course there is always the “cash” option, which, while ultimately may be the recipient’s preferred choice, seems a tad crass even if you do remember to pick up one of those newly minted hundreds while making your weekly bank deposit. Because the thing about cash is, not only does it let someone know that you don’t have any idea about what to get them, it also means you don’t really care about what they get themselves. For all you know they are using the money to feed some sort of nasty addiction they have successfully hidden from you and honestly, how does that make you feel?

Trust me, the advent of gift cards is truly a godsend not only for those of us in the shallow sphere but also for those who are not yet there. Think about it. You can gets cards for almost everything these days and it’s not that hard to figure out where someone shops or eats. You can give someone a gift and not have them know how cheap you are until they get to the store and by that time they will have forgotten who gave them the card. But most importantly, and I’m pretty sure this was the impetus behind the invention in the first place, you can buy someone a coffee, or even dinner, without actually having to be there to enjoy it with them. So who ever said I was nice?

Shallow in a sad world…again

It’s been another tough week and I find myself, once again, writing the shallow blog in a sad world. I’m thinking this may be harder for you, my readers, than it is for me since you quite possibly have been using this blog as a bit of a diversion, a little comic relief from things more important and pressing. But, I beg your pardon, I never promised you a rose garden. And tonight there is no joy in Mudville, I’m afraid. This week two families have lost a child, one to a horrendous accident and the other to a devastating disease. I know this happens everyday but this time it hit close to home with one being a good friend of my son and the other a good friend of a friend of his. As they suffer their loses together they find solace in conversation, in joining with others to celebrate the life and mourn the death of their friends. But I think it is too soon, too soon for this much sadness to come into their lives. As a Mother I understand the unbearable pain the death of a child brings to a family and, at the same time I am faced with the stark reality that all of the worrying, cajoling and praying I do to keep my children safe cannot protect them. Because I know that these Mothers worried too, they did everything they could to keep their children safe and yet they are gone. This week my heart breaks for those families.

Sorry but there is more. Last week my gorgeous, bright and vibrant sister-in-law, my youngest Brother’s wife, endured a seven and a half hour operation to remove a tumor from her spine. The good news is that she is going to be ok, the not so good news is that it might take a while. But if there is a heaven, and who am I to say if there is or isn’t, this marriage was made in it. We all know that because we can feel the love they have for each other and for their children whenever we walk into their home, share a meal, or join them in the celebration of a milestone. They have friends and family, lots of them, to help out and I know how important that is. But it is the strength of their love, their joy of life and everything in it, and their undying optimism that will carry them through. Next time I see Ruth she will be better than she is now and the time after that, better yet. I know this to be true because she won’t have it any other way. So here’s my “I know you’ll get well soon” wish ‘cause I know you will.

So there it is. Yep I’m still shallow. It’s just a little hard to talk about it right now.