By the Deep Blue Sea 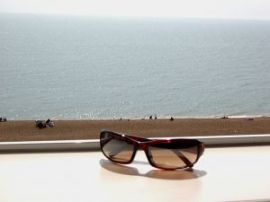 I’ll be the first to admit that I’m struggling a little here. Most of you don’t know this but I hate the cold which is more than a little ironic given that many, many, many years ago I moved from a somewhat moderate Canadian climate to one of the coldest cities in the country. That’s why, now that I am entering my more golden years, I chose to spend at least a portion of the frosty season in the southernmost part of California where the temps fall well within my rather limited comfort range and the livin’ is easy. It’s pretty nice here, what with the miles and miles of sparsely populated beaches that provide a sidewalk both north and south to possibly the best ocean view Starbuck’s patios this side of the Rockies. And now that you know this you’re perplexed and wondering what the heck I am struggling with. Well let me tell you.

I know you’re thinking that this part of the country in particular is a mecca for those of us who subscribe to the shallow way of life because, from all that we see and hear, that’s what we know to be true. I mean this *is* California, the centre of blatant and unabashed consumerism and the birthplace of those “Housewives”. Well I was with you on this one, that is until I got here. The first inkling I had that my expectations were not to be met occurred on the morning after arrival when I embarked on my inaugural visit to Costco, making my way along Coastal Highway 101 past the surf shops and the local pizza joints. The vistas are truly spectacular so it would be easy to miss the small sign, but not so much the temple like archway that serves as the entrance to the “Self-Realization Fellowship” as you journey from one beach town to the next. If you haven’t heard of it, this organization (can I call it that?) was founded in 1920 by Paramahansa Yogananda and it’s purpose is to help people “realize and express more fully in their lives the beauty, nobility, and divinity of the human spirit” which I can confidently say is anything but shallow and probably also explains the existence of the “Swami” cafe, and the “Swami” taxi company along with the fact that there are more yoga studios than I can comfortably count on all of my extremities. And that’s just the beginning.

As I navigate my way through the streets I begin to notice I’m a bit of an anomaly in my somewhat larger than I prefer carbon emission rental vehicle, being significantly outnumbered by the plethora of “Leafs”, “Prius’ A, B, and Cs”, “Smart Cars” and various other hybrids, electrics and heretofore never seen environmentally friendly options with which I am unfamiliar, not surprisingly so since I hail from one of the largest oil producing provinces in the world. And while I don’t really have a beef with environmentalists I’m not all that thrilled about having the prime parking spots set aside for them while I do battle for the few remaining ones at the back of the lot . Not only that but it’s a veritable “Tour de France” what with all of the bikes sailing past in their designated lanes.

Returning with my oversized packages of just about everything I breathe a sigh of relief as the familiar green umbrellas come into view and I hold out hope that things are going to take a turn for the better. At the Starbucks, where by all rights I should have been sitting beside overly tanned and too blonde dudes and dudettes saying surfer stuff like “hey bro, that was an awesome ride” and “Cowabunga! Eddie would go”, I instead find myself sharing space with a group of business types making arrangements for a session on team building with a woman whose qualifications are not limited to but include, being a member of a world class mountaineering team that won a championship climbing competition somewhere in Borneo. To be honest, it’s a tad disorienting and I’m already finding myself shopping at places like “Whole Foods” and “Sprouts”. Next thing you know I’ll be walking into the holistic healing centre located right next door to my temporary digs to see what they can do about the blisters I’m getting from all the walking I have to do to get from my car to the store.

So there you have it. I’m going to do my best to stay the course but I’m beginning to think I might have to wear my shades and baseball cap in an effort to generate some Babs sightings just to be sure that I have something to write about. Because apparently the ocean isn’t the only thing that is deep around here.

6 thoughts on “By the Deep Blue Sea”